Join guest speaker Rev. Matt Rawle on a 10-day Voyages of Paul Cruise with 8 nights aboard Celebrity Infinity, starting at $3,998* from New York, NY, departing on June 30, 2023. Journey to places such as Dubrovnik, Santorini, Rhodes, Ephesus, and much more! 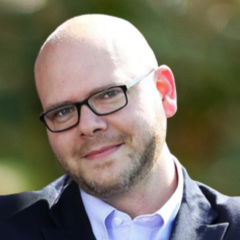 Matt Rawle is the Lead Pastor at Asbury United Methodist Church in Bossier City, Louisiana, and a graduate from the LSU School of Music and Duke Divinity... read more

† If air purchased through EO.

You will arrive in Venice, Italy, where you will be met by our representative and transferred to the port of Ravenna to board the Celebrity Infinity.

Established 1,300 years ago on the far southern tip of the Dalmatian Coast, this city once rivaled Venice in terms of its importance. Take a walking tour to the Dominican Monastery and marvel at the finest collection of Renaissance paintings, including a painting by Titian. Prepare to be riveted when first laying eyes on the old walled city on your cruise to Dubrovnik. This land has had many invaders including the Greeks, Romans, Slavs, Hungarians, and French, to name a few, and it has resulted in a fiercely independent citizenry with dynamic cultural influences. The views of the Adriatic from its rooftops are truly awe-inspiring. If beach-going is on the agenda, make sure to wear appropriate footwear as the beaches here tend to be of the pebbly variety. That said, the beautiful emerald green waters and coves make the slight inconvenience more than worthwhile. And there’s plenty of seafood, specifically mussels and oysters, deliciously prepared in authentic regional styles on offer at restaurants throughout town.

Dock in Santorini today, one of the most beautiful of the Greek islands, where picturesque whitewashed villages topped with brilliant blue domes stand in stark contrast to the sheer drop cliffs overlooking the Aegean Sea. The island itself perches on the edges of a volcano whose eruption 3,500 years ago is thought to have led to the collapse of the Minoan civilization. Explore the island on your own or join one of the optional excursions available for purchase onboard.
Shore excursions today will be booked directly through Celebrity and are not included.

The Colossus might not be standing anymore, but the Greek island of Rhodes still delivers beauty and allure on a giant scale. Explore Rhodes today on your own or opt to see the site in the harbor where the now-destroyed wonder of the ancient world once stood. Then, head to the Old Town, surrounded by medieval walls and seven ancient gates. Don’t miss the Palace of the Grandmaster, with its mosaic floors dating from Hellenic, Roman, and early Christian times.

Ephesus is another of the Seven Churches of Revelation and was once a bustling port town graced with wide, colonnade-bordered streets and a population of 250,000. Although spectacular excavations have revealed much of the glory of ancient Ephesus, including the huge agora and library, much has been lost. The ancient world once declared the Temple of Artemis to be one of the Seven Wonders of the World but today, only a single column remains to mark its site. View the terrace houses, also known as “the houses of the rich,” which give a true impression of the ancient lifestyle. Explore the Museum of Ephesus for an up-close look at ancient artifacts. You will have time to explore on your own and recreate some of the footsteps of Paul.

Nafplio is a seaport town in the Peloponnese in Greece that has expanded up the hillsides near the north end of the Argolic Gulf.
Shore excursions today will be booked directly through Celebrity and are not included.

Disembark the Celebrity Infinity in Pireaus. Travel to the ancient city of Athens as your guide introduces you to the world-renowned Acropolis, the Propylaea, the Parthenon, and the Erectheum. Stand on Mars Hill as the Apostle Paul did when he proclaimed, “I found an altar with this inscription, TO THE UNKNOWN GOD. Whom, therefore, ye ignorantly worship, him declare I unto you.” As you stroll the agora (ancient marketplace and center of Athenian public life), recall that this was where the Apostle Paul preached “Jesus and the resurrection” to the skeptical Athenians. Also, see the House of Parliament, the Presidential Palace, and the Tomb of the Unknown Soldier. This afternoon, tour the city of Corinth, where the Apostle Paul met fellow tentmakers Aquila and Priscilla and received a vision from the Lord saying, “I am with thee, and no man shall set on thee to hurt thee:  for I have much people in this city.”  As Paul spoke, Crispus (chief ruler of the synagogue), and many others believed and were baptized, establishing the church at Corinth to whom Paul later wrote his two epistles.  Discover the archaeological museum, marketplace, and temples. As you walk among the ruins, stand on the Bema, where the Apostle Paul stood before Gallio to face charges brought against him by the Jews. Spend the night in Athens.

Check out of your hotel in Athens and transfer to the airport. Return home with a new understanding of the Apostle Paul’s life and ministry.

June 29 - Venice
Arrive in Venice and tour the magical city of Venice. Rising between sea and sky, this fascinating city boasts waterways and boats instead of roads and cars, and comprises 118 islands separated by more than 150 canals. Stand in the Piazza San Marco, bordered on three sides by palatial arcades in two tiers and faced on the other by the Basilica of St. Mark, one of the world’s most magnificent churches. Tour the Basilica with its treasure of marble and gold-background mosaics. From the square, you can see the famous Bell Tower and the Clock Tower as well as the charming pink and white Doges’ Palace. After seeing the romantic Bridge of Sighs, check into your hotel for dinner and overnight. (D)

June 30 - Venice
Enjoy free time to explore on your own today. You can shop, stroll along the bridges and canals, or even indulge in a gondola ride along the Grand Canal. Breakfast is included at your hotel today, and dinner is on your own. (B)

July 1 - Embark on the Infinity

July 10 - Cappadocia
Drive to Cappadocia and visit the Zelve Valley. As you drive through Cappadocia, enjoy some free time at various photo stops in this magnificent landscape full of fairy chimneys. Visit the Goreme Open-Air Museum before returning to your hotel.

July 11 - Cappadocia
You can take an optional hot air balloon ride over Cappadocia this morning for an additional fee. Fly this afternoon to Istanbul and check into your hotel for dinner and overnight.

July 12 - Istanbul
The bejeweled capital of Istanbul sits between two continents and is home to 450 mosques. You will visit the famous Blue Mosque with its six minarets and sparkling interior. You will also visit the Topkapi Palace, once home to royal sultans. Inside, you will see the fabled jewels of the treasury, delicate displays of Chinese porcelain in the kitchen quarters, and the provocative harem quarters. Walk through Hagia Sophia, which was the largest church in Christendom for 1000 years, built by Justinian (532-537 AD).  The church has 107 columns, fossil-embedded, white marble floors, and beautiful glass mosaics. Enjoy the aroma of cinnamon, cloves, thyme, and other exotic spices as you explore the Grand Bazaar. Over 4,000 shops sell everything from herbs to gold. Return to your hotel this evening for dinner and overnight.

July 13 - Return to the USA
Transfer to the airport for your return flight to the USA.

*A 3.5% surcharge will be added to all credit card transactions
Share this