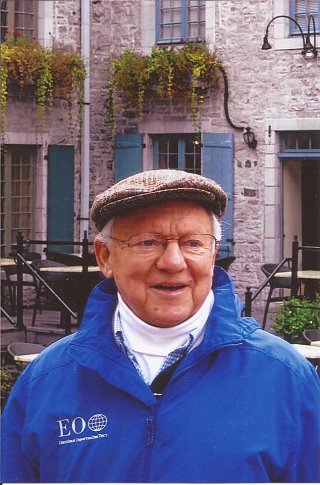 Dr. Ed Crump passed away on Friday, May 24 at age 90. Ed served as a tour host, 20+ years as a DTM, and an Area Manager in the course of his involvement with EO which spanned 35+ years. If we had stat lines like on the back of a baseball card, Ed's stats would merit first ballot EO hall of fame status. 46 Holy Land tours -- not including the years he served for 2-3 months at a time in hospitality in Jerusalem, 11 Journeys of Paul cruises or land tours, 10 Celebration Cruises, 9 river cruises, amongst other EO journeys. He led literally hundreds of pastors on Holy Land fam trips in late 1980s and early 1990s. He met his 2nd wife after years of being a widower on an EO hospitality assignment, and even married Paula and Bob King. His extended family were also frequent travelers on EO trips. Ed and his second wife, Sara, even make a brief cameo appearance in many of our Oberammergau 2020 Passion Play promo videos. His ministry with EO and all of us was first and foremost after his retirement from ministry.

Beyond all of the EO work, one would be hard pressed to find a more sincere, caring, compassionate individual than Ed Crump. In the 25+ years knowing him, I do not remember Ed ever being angry. I spent many nights at Ed's house whether in Nashville or Lake Junaluska, NC, as he always had a bedroom for me. Indeed it became a ritual for me to spend a day in June on Ed's back porch in the NC woods and work on the following winter's guide assignments. I looked forward to that day and some fellowship with Ed and Sara. Ed loved ice cream and we indulged while browsing picture books of Ed and Sara's latest EO journeys. Last June, I made my annual visit just a few days ahead of Ed's 90th birthday. We celebrated at one of our favorite restaurants in Waynesville, NC. I remember noticing at that lunch that Ed was laboring more than usual in his swallowing which we would later found out was caused by cancer in his esophagus. However, Ed was as spry as any 90 year old I ever met, and frankly if you set the two of us out to walk competitively that day, I think Ed would have beaten me handily. Indeed some of the staff had the opportunity to walk Jerusalem with Ed through the years and most will still talk about the experience of seeing Jerusalem by foot and an 80+ year old man walking them into the ground.

So what drove Ed to visit and serve in the Holy Land so often? It was a simple story and one which I never got tired of hearing from Ed. As a child of the Depression, he loved looking at the pictures of the Holy Land in his Bible. He determined at a young age that he was going to visit the Holy Land. And he did in the mid 1950s while studying at New College in Edinburgh, Scotland. He took a ship to Israel which was as a country was just a few years old. Those pictures in his Bible came to life like a pop-up picture book and that visit led to life long desire to share that joy with others. Ed was never influenced by financial gain or accumulating tour host credits, he just wanted to share his joy and passion of the Holy Land and Christian travel.

The family has asked that I share reflections on Ed's ministry in the Holy Land at the funeral on Saturday (6/1/19). It is a tremendous honor for me on behalf of EO. I hope I can be as eloquent as Ed always was. So for those of you who knew Ed and might have a favorite story please send me an email. One of the better Facebook posts I have seen over the weekend noted that Ed passed away on Aldersgate Day -- the day John Wesley had his heart strangely warmed on Aldersgate Street -- the pivotal day in the founding of the Methodist movement. I think for most of us who came into contact with Ed over these many years, our hearts were always warmed being in his presence. Rest in peace, friend.

Born July 13, 1928, in Knoxville, Tennessee, to the late Reverend Edward Lee Crump, Sr., and Lucy Frances Caldwell Crump, Ed accepted God’s call to ministry at the age of 17. During his nearly 70 years in ministry, Ed served for 43 years in active service under appointment in the United Methodist Church Memphis and Tennessee Conferences and an additional 26 years leading pilgrimages to the Holy Land and around the world.

Known to many as the “Traveling Pastor,” Ed led more than 80 pilgrimages to the Holy Land and around the world, including 50+ Holy Land tours and 11 tours re-tracing the Journeys of Paul. Since his first journey to the Holy Land in 1952, Ed developed a deep passion to introduce people to the Bible story through travel with Christian travel company, Educational Opportunities Tours.

Ed is preceded in death by his wife, Georgia Lee Atkinson Crump; his parents; and brother, John Robert Crump.

Journey Through the Bible 2021

You will find the information you need to complete this form on the cover of your brochure near the suitcase icon.