Join us on the Paris & Normandy Cruise 2020 with guest speaker The Rev. Sandy Webb! From October 14-22, experience places such as the beaches of Normandy, Claude Monet's home in Vernon, and the last home of Vincent van Gogh, Auberge Ravoux. Pricing for this 9-day river cruise starts at $3,798*.

Special Airfare Pricing from select cities when you register by 04/30/20 from $100. Check the brochure for details. 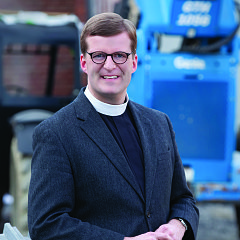 The Reverend Sandy Webb has served as Rector of Church of the Holy Communion (Episcopal) in Memphis, and as a trustee of St. Mary’s Episcopal School, since... read more

Board your overnight flight to Paris, France.

Spend the morning enjoying medieval Rouen with a choice of several excursions. Join a walking tour past the imposing Notre Dame Cathedral, painted numerous times by Monet, and see the square where Joan of Arc was martyred, as well as the Medieval Quarter and Great Clock. You also have the choice to explore Lyons-la-Forêt, built on the site of a former fortress and featuring remarkable centuries-old architecture; go on the “Tastes of Normandy” tour, where you’ll be treated to the delicious flavors of the region, including chocolate, macaron, Norman cheese and cider; or get active by going on a guided bike tour. (B,L,D)