Join us and Guest Speaker The Rev. Austin K. Rios on the 10 Night Highlights of Paul's Journeys Cruise aboard the Azamara Pursuit and 1 Night in Athens. Pricing starts at $6,098* with flights from New York, NY. Visit places such as Ephesus, Amalfi, Rhodes, Sorrento, Santorini, Patmos, Athens, Corinth, Mykonos, and much more, September 3-15, 2021! 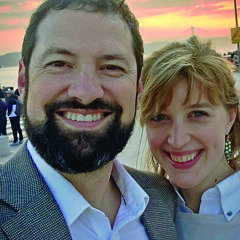 The Rev. Austin K. Rios is Rector of St. Paul’s Within the Walls Episcopal Church in Rome, Italy. Austin has been adapting life and ministry to different... read more

Your pilgrimage begins as you depart the USA on your international overnight flight.

You will arrive in Rome, Italy where you will be met by our representative and transferred to the Port of Civitavecchia to board the Azamara Pursuit.

Looking out from Sorrento is the isle of Capri. The island is divided into two main parts, Capri and Anacapri. Capri is full of Italian luxury, with designer stores and five-star hotels lining the streets, while Anacapri is slightly more down-to-earth. Take a relaxing chair lift ride to the very top of the island, as the views are jaw-droppingly gorgeous.

Enter one of the most remarkable archaeological sites ever unearthed, the lost city of Pompeii. Once a thriving Roman port and a hub of commerce and politics, all was lost on a fateful day in 79 AD when Mount Vesuvius exploded in a torrent of ash and cinder. For 1,700 years Pompeii lay undiscovered beneath 30 feet of volcanic debris. Today, it’s widely considered the world’s most fascinating archaeological discovery. Stroll through the narrow streets that once bustled with activity. Observe the remains of the grand Temple of Apollo and view artifacts wonderfully preserved due to the lack of air beneath the volcanic ash. Perhaps the most moving images of Pompeii are plaster casts made during the excavations — voids left in the ash by citizens huddling in their final moments. It’s an eerie glimpse of lives lost millennia ago on the last day of a great city.

Classic sights like the Ortygia, Neapolis, and the Basilica of Santa Lucia are always worth a visit, but if you’re looking for something a little more offbeat, take in a puppet theatre show—a traditional form of Sicilian entertainment. The stunning Fonte Aretusa was once the source of the city’s drinking water, and now the pond and surrounding area is a scenic spot, perfect for a picnic lunch.

Enjoy a day at sea aboard the Azamara Pursuit.

Dock in Santorini today, one of the most beautiful of the Greek islands where picturesque whitewashed villages topped with brilliant blue domes stand in stark contrast to the sheer drop cliffs overlooking the Aegean Sea. The island itself perches on the edges of a volcano whose eruption 3,500 years ago is thought to have led to the collapse of the Minoan civilization. Explore the island on your own or join one of the optional excursions available for purchase on board.

Get the real authentic Rhodes experience by exploring it on foot. Your walking tour will begin in picturesque Old Town, where you will pass through and learn all about Agora and Collachium, where the Knights of St. John of Jerusalem lived and worked. Marvel at the stunning churches, exquisite Jewish quarter, the Inns of Knights, and the Palace of Grand Masters. You will then tour the palace interior and down the Street of Knights — its path paved with impressive marble and mosaics. Then it’s on to the Hospital of Knights museum, where you’ll learn all about the ins and outs of this majestic town. Afterwards, stop for a refreshment in a local café. Exploring Rhodes on foot will inevitably leave a lasting impression on you.

Ephesus is another of the Seven Churches of Revelation and was once a bustling port town graced with wide, colonnade-bordered streets and a population of 250,000. Although spectacular excavations have revealed much of the glory of ancient Ephesus, including the huge Agora and Library, much has been lost. The ancient world once declared the Temple of Artemis to be one of the Seven Wonders of the World but today, only a single column remains to mark its site. View the terrace houses, also known as "the houses of the rich," which give a true impression of ancient lifestyle. Explore the Museum of Ephesus for an up-close look at ancient artifacts. You will see Mary’s house and then have time to explore on your own and recreate some of the footsteps of Paul.

Venture within the towering walls of St. John’s Monastery to explore its battlements and religious history. This castle-like Byzantine structure looms in stark contrast to the gleaming white homes that rest below its dark façade. Built by the monk Christodoulos in 1088, it has remained in continuous operation, surviving epic raids by Norman pirates in the 11th and 12th centuries. Inside, countless treasures are safeguarded, including a magnificent collection of jeweled chalices, crowns and crosses, ancient transcriptions by Aristotle and masterful artwork by El Greco. Continue to the Grotto of St. John, built around a sacred cave where the disciple is said to have composed the Book of Revelation. Conclude your excursion with a panoramic drive along the jagged coastline of Patmos, where jutting spits of land stretch far into the deep-blue sea. Enjoy a full day immersed in the historical, religious and natural wonders of this amazing Greek Isle.

Arrive today at the world-famous Greek Island of Mykonos, where gleaming whitewashed buildings seem to climb atop each other to reach the azure sky. Admire its many hills dotted with iconic windmills. Explore the island on your own or join one of the optional excursions available for purchase on board.

Disembark in Piraeus. Discover the rich architectural splendor of the ancient city of Athens as your guide introduces you to the world-renowned Acropolis, the Propylaea, the Parthenon and the Erechtheum. Stand on Mars Hill as the apostle Paul did when he proclaimed, "I found an altar with this inscription, TO THE UNKNOWN GOD. Whom therefore ye ignorantly worship, him declare I unto you". As you stroll the Agora (ancient market place and center of Athenian public life), recall that this was where the Apostle Paul preached "Jesus and the resurrection" to the skeptical Athenians. Also see the House of Parliament, the Presidential Palace and the Tomb of the Unknown Soldier. This afternoon tour the city of Corinth, where the apostle Paul met fellow tentmakers Aquila and Priscilla and received a vision from the Lord saying, "I am with thee, and no man shall set on thee to hurt thee: for I have much people in this city". As Paul spoke, Crispus (chief ruler of the synagogue) and many others believed and were baptized, establishing the church at Corinth to whom Paul later wrote his two epistles. Discover the Archaeological Museum, Market Place and Temples. As you walk among the ruins, stand on the Bema, where the apostle Paul stood before Gallio to face charges brought against him by the Jews. Overnight in Athens.

Today you will arrive in Rome, Italy where you will be met by our representative and travel along the Appian Way. Step beneath the surface into the Catacombs of Callixtus, built along the Appian Way. Here 16 Popes from the 2nd through 4th Centuries were interred, though they have been removed to various churches over the centuries. Celebrate a Eucharist service in the Catacombs before checking in to your hotel in Rome for your three night stay.

After Breakfast, in the morning visit the Joel Nafuma Refugee Center before discovering the history woven throughout Rome with a visit to the Colosseum. See the Roman Forum, the Circus Maximus, the Arch of Titus, the Baths of Caracalla and the Arch of Constantine during the day. Free time for lunch on own at Piazza Navona and then proceed with a walking tour to see the Pantheon, Spanish Steps and stop at the famous Trevi Fountain. Enjoy dinner at a local restaurant before returning to your hotel this evening.

After breakfast, depart your hotel by motorcoach for a guided tour of Vatican City and enjoy a private tour of the Gardens before exploring its unparalleled museums. Marvel at the beauty of St. Peter’s Basilica, and stand in awe of Michelangelo’s frescoes in the Sistine Chapel. Free time for lunch on own around St. Peter’s Square area and then celebrate a Eucharist Service at Saint Paul’s Within the Walls Episcopal Church. Enjoy dinner at a local restaurant this evening.

After enjoying breakfast at your hotel, you will be transferred to the port of Civitavecchia to embark on the luxurious Azamara Pursuit.

Travel to scenic Delphi, religious center of the ancient Greek world and marked by the conical stone called the omphalosor (“navel”). Walk the Sacra Via to the Athenian Treasury, Theatre and the Temple of Apollo, where the oracle performed her prophetic rituals. As you consider the incredible amount of pagan influence just in Delphi alone, you will gain a new appreciation for the tremendous spiritual opposition the apostle Paul faced in preaching the Gospel of Christ. Spend tonight in Kalambaka

Journey to Veria (Berea), where Jews and some honorable Greeks accepted the new faith. As you visit the rock forest of Meteora, imagine the apostle Paul walking that treacherous terrain on his missionary journey. Gaze up at the breathtaking Byzantine monasteries spectacularly perched on soaring, sheer-sided grey sandstone pillars. Check in to your hotel in Thessaloniki where you will spend three nights.

Follow in the footsteps of Paul and Silas to Amphipolis and explore the ruins of the many Christian basilicas. In Philippi is a baptismal site commemorating where God opened the heart of Lydia to hear the words of Paul. Lydia and her household were the first Christian converts baptized on European soil. View the Roman-era crypt thought to have served as a prison for the apostle Paul, and explore Philippi’s famous Acropolis, Market Place, the Basilica of Paul, and Theater. Today’s last stop is Neapolis (Kavala), one of Greece’s most picturesque mainland ports where Paul landed. See the Roman Aqueduct and Acropolis before returning to Thessaloniki.

Discover Thessaloniki, where Paul was accused of turning the world upside down with his preaching of Christ. As you explore St. George’s Basilica, reflect on the two epistles the apostle Paul wrote to the Thessalonian church here. Stroll through the Archaeological Museum and the beautiful basilicas of St. Sophia and St. Demetrios, dedicated to a Roman proconsul martyred for his Christian faith.